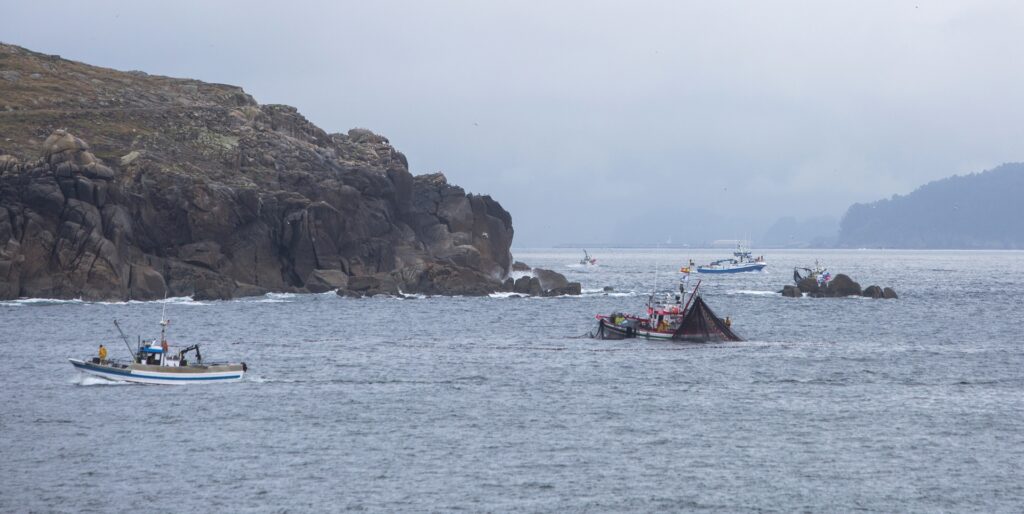 With the arrival of late afternoon, the fishermen would cast their nets to lie in wait for the fish. O Pedregal was a place full of people and boats. They would fish using the xeito*, the cerco* and sometimes, the patexo* as well. Equipped with their carabel or basket, food, and drink, they would return with nets full of sardines. This was the daily life of fishermen a century ago.

Salting was also a very important industry in the municipality. During the 18th century, it was introduced through Catalan businessmen as a new method for preserving fish. In just a short time, Ares became a benchmark for this trade. Women mainly worked in this business. Of the 1,900 people who lived in the village at that time, 700 women worked in salting.

Ares is therefore a place of great seafaring tradition. Fishing for sardines, sea bream, sea bass or the capture of octopus, velvet crab and shrimp is very important for this area. However, in the past, the sea would be full of boats using a variety of different fishing gear, but today, only five vessels can be found in Ares’ port; two purse-seine boats and three gill-net boats. This is due to the difficulties now faced by the sector.

Restrictions on catches make it difficult for fishermen and their boats to survive. In addition, the high costs involved with starting-out in the profession, hinder generational substitution, even though there are people well prepared for the job.

Artisanal or traditional fishing respects the marine environment and is a rooted community activity. It guarantees that the sea is cared for, and highlights the quality of the local product. Nobody understands these important aspects better than those who know most about the sea: the fishermen. Therefore, their profession should be valued, respected and cared for, since fishing is essential for the development of the Galician coast.

*Xeito: a very popular, ancient drift fishing technique, that uses a long net stretched out for hours, to entangle sardine.

*Purse-seine: a traditional fishing technique where fish are surrounded by a large net to catch them.

Did you know that…

…the preparation of fishing nets was a very laborious job? Fishermen had to dye their nets and to do so, they cooked pine-tree bark in enormous copper pots and added a few kilos of tannin paste (an organic compound extracted from plants), to give the nets more colour. The water was then poured into a large sink to cool, after which a device was lowered in. The net was passed through some boards and allowed to drain from one day to the next. Finally, the net was dried on the winches. They had to repeat this task, at least every six weeks… so, a sailor’s work was never easy!